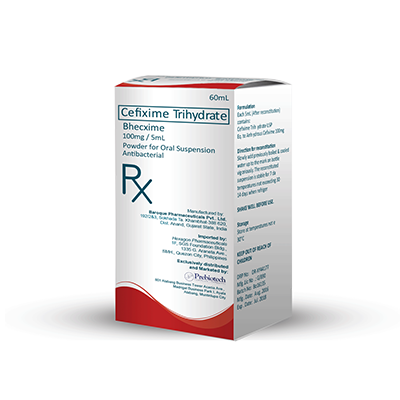 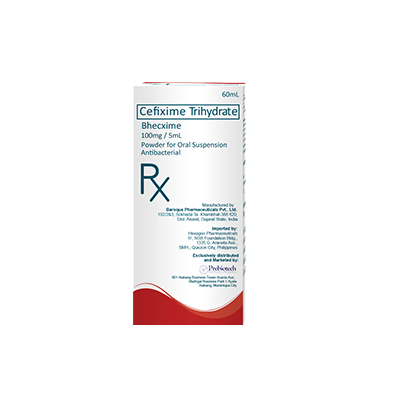 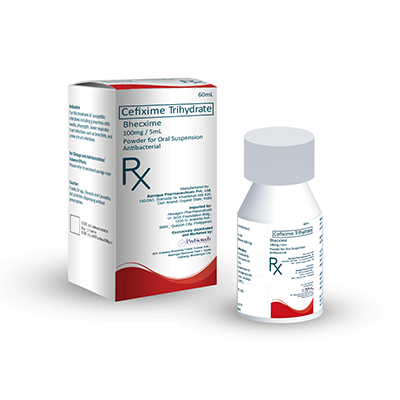 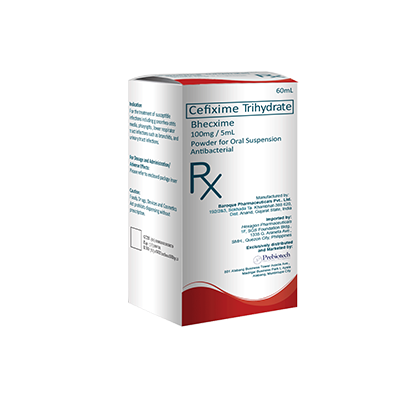 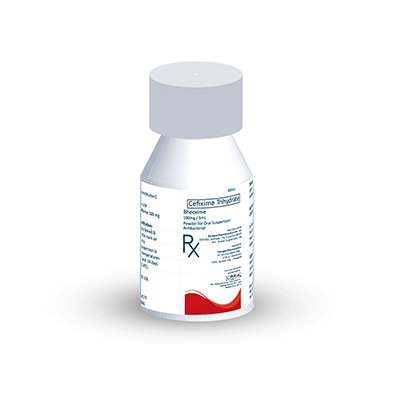 3 Ways to a Better Cure!

Cefixime, given orally, is about 40% to 50% absorbed wether administered with or without food; however, time to maximal absorption is increased approximately 0.8 hours when admnistered with food. A single 200mg capsule of cefixime produces an average peak serum concentration of approximately 2mcg/mL. Peak serum concentration following oral administration of the absorbed dose is excreted unchanged in the urine in 24hours. In animal studies, it was noted that Cefixime is also excreted in bile in excess of 10% of the administered dose . Serum protein binding is concentration independent with a bound fraction of approximately 65%. The serum half-life of Cefixime in healthy subjects is independent of dosage form and average 3 to 4 hours. In subjects with moderate impairment of renal function. (20 to 40 mL/minute creatinine clearance), the average serum half-life of Cefixime is prolonged to 6.4 hours. In severe renal impairment (5 to 20 mL/minute creatinine clearnce), the average serum half-life of Cefixime is prolonged to 11.5 hours. There is no evidence of metabolism of Cefixime in vivo. 60mL

Absorption of Cefixime is not significatly modified by the presence of food. The usual course of treatment is 7-14 days.

Adults and Children over 12 years: The recommended adult dosage is 400 mg either as a single dose or in two divided doses.

Slowly add previously boiled & cooled water up to the mark on bottle. Shake vigorously. The reconstituted suspension is stable for 7 days at temperatures not exceeding 30°C and 14 days when refrigerated (2-8° C).

Cefixime is contraindicated in patients with known hypersensitivity to cephalosporin antibiotics.

Cefixime should be given with caution to patients who have shown hypersensitivity to penicillins, cephalosporins or other drugs. Cephalosporins should be given with caution to penicillin sensitive patients, as there is some evidence of patial cross-allergenicity between the penicillins and the cephalosporins. Patients have had severe reactions (including anaphylaxis) to both classes of drugs. If an allergic effect occurs with Cefixime, the drug should be discontinued and the patient treated with appropriate agents if necessary.

Treatment with broad spectrum antibiotics, including Cefixime alters the normal flora of the colon and may permit overgrowth of clostridia. Studies indicated that a toxin produced by Clostridium difficile is a primary cause of severe antibiotic-associated diarrhea including pseudomembranous colitis.

Cefixime should be administered with caution in patients with markedly impaired renal function. Cefixime should be prescribed with caution in patients with history of gastrointestinal disease, particularly colitis. A false-positive reaction for ketones in the urine may occur with tests using nitroprusside but not with Those using nitroferricyanide. A false-positive reaction to glucose in the urine may occur with Benedict's or Fehling's solution or with copper sulfate test capsules, but not with tests based on enzymatic glucose oxidase reactions. A false-positive direct Coombs test has been reported during treatment with cephalosporin antibiotics, therefore it should be recognized that a positive Coombs test may be due to the drug.


USE IN PREGNANCY, LACTATION & CHILDREN

There are no adequate and well controlled studies in pregnant women. Cefixime should therefore not be used in pregnancy or in nursing mothers unless considered essential by the physician. The safety and efficacy of Cefixime has not been established in children aged less than 6 months.

Care should be exercised in patients receiving anticoagulants and cefixime due to the possibility may increase prothrombin times.

Cefixime is generally well tolerated. The majority of adverse reactions observed in clinical trials were mild and self limiting in nature.

Gastrointestinal disturbances: The most frequent side effects with Cefixime are diarrhea and stool changes. Some cases of moderate to severe diarrhea have been reported; this has occasionally warranted cessation of therapy. Cefixime should be discontinued if marked diarrhea occurs. Other gastrointestinal side effects seen less frequently are neausea, abdominal pain, dyspepsia, vomiting and flatulence. Pseudomembranous colitis has been reported.

Hypersensitivity reactions: Allergies in the form of rash, pruritus, urticarial, drug fever and arthralgia have been observed. These reactions usually subsided upon discontinuation of therapy

Haemotological and clinical chemistry: Thrombocytopenia, leucopenia and eosinophilia have been reported. These reactions where ifrequent and reversible. Mild transient changes in liver and renal function tests have been observed. Miscellaneous: Other possible reactions include genital pruritus and vaginitis.

Gastric lavage may be indicated; otherwise, no specific antidote exists. Cefixime is not removed in significant quantities from the circulation by hemodialysis or peritoneal dialysis. Adverse reactions in small numbers of healthy adult volunteers receiving single doses up to 2g of Cefixime did not differ from the profile seen in patients treated at the recommended doses.

Store at temperatures not exceeding 30°C.
Keep out of reach of children.

60mL HDPE bottle in a box