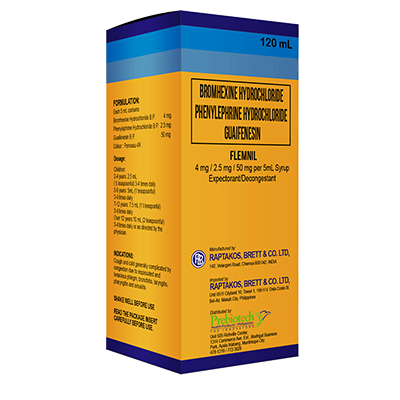 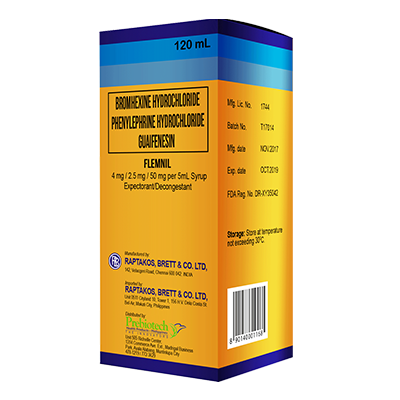 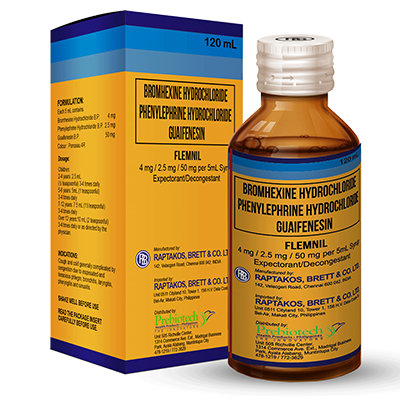 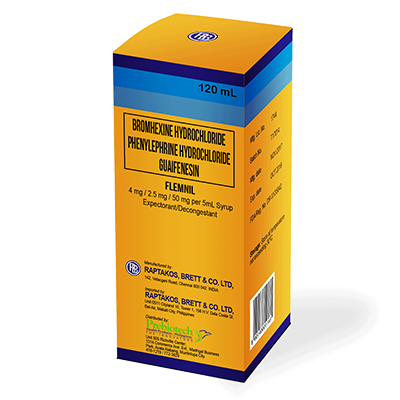 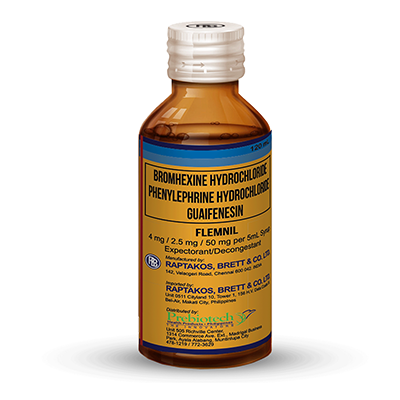 A New Dimension in Cough Preparation

The most synergistic expectorant and mucolytic formulation, with an added benefit of phenyleprine, for the treatment of Brobhitis, Pneumonia, TB, URTI and Sinusitis, The cough and cold treatment for all seasons!

Cough and colds generally complicated by congestion due to insisted and tenacious phlegm, bronchitis, laryngitis and sinusitis.

Since the safety of Bromhexine Hydrochloride + Phenylephrine Hydrochloride + Guaifenesin (Flemnil) for use in pregnancy has not been established, potential benefits should be weighed against adverse effects. Nursing mother should not use this product.

The majority of patients will experience no side effects with Bromhexine Hydrochloride + Phenylephrine Hydrochloride + Guaifenesin (Flemnil), those particularly sensitive to symphathomimetic drugs may experience mild stimulation. Inform your physician the unwanted effects after administering.

Potentially Hazardous Interaction: Hypertension may occur when phenylephrine is given concurrently with anti-depressants of both monoamine oxidase and tricylic type’s ganglion blocking agents, adrenergic-blocking drugs, rauwolfia alkaloids and methyl dopa. The concomitant administration with monoamine oxidase has been associated with severe elevations of blood pressure. Use with non-steroid drug. Indomethacin has been associated with hypertension and there is a report that concomitant atropine administration also promoted sustain hypertension, presumably by interfering with the hypertension-induced reflex fall in the heart rate.

None has been described.

Bottle of 120 Ml per box with calibrated cup.

Store at a temperature not exceeding 300C.